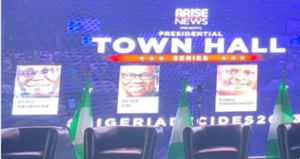 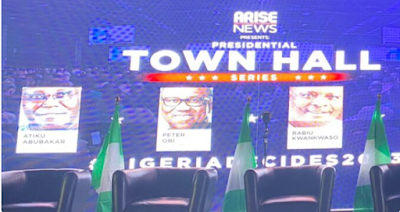 The third edition of the presidential town hall series organised by Arise TV in collaboration with the Centre for Democracy and Development (CDD) is scheduled to hold on December 4.

The first and second editions, which featured presidential candidates from six out of eight political parties — the Peoples Democratic Party was represented by its vice-presidential candidate while the All Progressives Congress was absent — was focused on security and economy.

The third edition will focus on issues around education, healthcare, poverty, and human capital.

The Nigeria Union of Journalists (NUJ), Nigeria Guild of Editors (NGE), as well as nine media organisations — TheCable, Premium Times, Vanguard, The Punch, The Guardian, Daily Trust, Leadership, New Telegraph, The Sun — are partnering with Arise TV and CDD on the programme.

The announcement of the third edition of the town hall meeting comes days after the National Bureau of Statistics (NBS), in a report, said 133 million Nigerians are multi dimensionally poor.

Multidimensional poverty encompasses deprivations experienced by poor people — such as poor health, lack of education, inadequate living standards, and living in environmentally hazardous areas, among others, according to Oxford Poverty and Human Development Initiative.

According to the NBS report, 63 percent of Nigerians are poor due to a lack of access to health, education, and living standards, as well as unemployment and shocks.