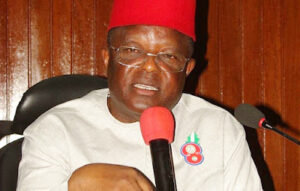 The Supreme Court has affirmed David Umahi, Ebonyi governor, as the candidate of the All Progressives Congress (APC) for Ebonyi south senatorial district.

In a unanimous judgment delivered on Friday, a five-member panel of the apex court led by Kudirat Kekere-Ekun, dismissed the appeal filed by Ann Agom-Eze, an aspirant for the senatorial seat.

Agom-Eze had challenged Umahi’s election as the APC candidate for the senatorial district.

On July 22, a federal high court in Abakaliki dismissed a suit filed by Umahi asking the court to recognise him as the APC candidate for the senatorial district.

The court subsequently ordered that a fresh primary be conducted within 14 days.

The APC conducted a fresh primary on July 31, and Umahi was declared the winner.

A few weeks after the loss, Agom-Eze was expelled from the APC over alleged rebellious and unruly behaviour.

On September 30, the Abuja court of appeal set aside the high court judgment which voided Umahi’s nomination.

Consequently, Agom-Eze filed an appeal before the Supreme Court.

The apex court, in its decision, held that the appeal lacked merit and ought to be dismissed.