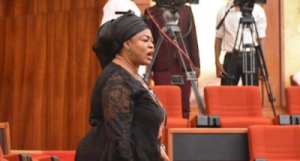 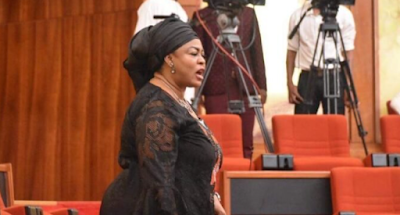 Stella Oduah, senator representing Anambra north, says she abstained from voting on the electronic transmission of election results because she didn’t want to reject the work she was part of.

Oduah, a member of the committee on the Independent National Electoral Commission (INEC), was among 27 senators who were absent when voting was held.

The provision for electronic transmission of electronic results is contained in section 50(3) of the electoral act amendment bill which was passed on Thursday.

The upper legislative chamber retained an amendment by Sabi Abdullahi, senate deputy whip, who proposed that the Nigeria Communication Communication (NCC) must certify that national coverage is adequate and secure, while the national assembly must approve before the Independent National Electoral Commission (INEC) can transmit election results electronically.

Albert Bassey, senator representing Akwa Ibom north-east, had kicked against the motion and said the initial proposal made by the committee should be retained.

The recommendation of the committee reads: “The commission may transmit results of elections by electronic means where and when practicable.”

To adopt Abdullahi’s proposal, the senators had a 52-28 vote using the “division” method which is provided for in order 73 of the senate rule book.

In a terse statement on Friday, Oduah said she abstained from the voting by walking out of the red chamber because it would be “unjust” if she rejects her committee’s work.

“We took time to arrive at that decision at the committee meeting and coming to plenary to reject it will be unjust, that was why I walked out,” the senator said.

“In as much as number is a very significant decider in parliament, we should also take decisions having future projection and nation development in mind.”