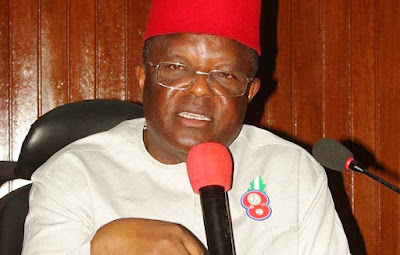 The Governor of Ebonyi State, David Umahi on Thursday said he will fight corruption to a standstill in Nigeria if he becomes President of the country.

He had visited the Presidential villa to intimate President Muhammadu Buhari of his intention to run for the country’s number one position in the 2023 general election.

The governor said he is on the list of aspirants who are desiring to become the President, especially under the ruling All Progressive Congress, APC, noting that he is confident of victory.

He tasked supporters and prominent stakeholders of the southeast zone, especially youths in Ebonyi to desist from insulting other Presidential aspirants.

The governor threatened that anyone who causes crisis and killings in the southeast zone will be crushed.

He said, “I want to discuss Political solutions with Mr. President. President Muhammadu Buhari is a man that listens and has love for the nation. I told him that the leaders of the southeast zone desire a political solution without prejudice.

“There should be no further hate speeches. And no further crisis, violence or killings. My position as the chairman of the southeast governor’s forum is that anyone who wants to cause crisis in the southeast must be crushed. Enough is enough. The economy of the region has been destroyed and we are worried about it.

“If not the Grace of God, the southeast would have been destroyed before other regions in entire Nigeria. They were dishing out hate speeches. The Igbo man is a builder and not a destroyer.

“And let nobody be afraid of the Presidency of Igbo man. There is nobody from the south-east will become President, that will not work for the greater unity of this nation, because we have investments everywhere.

“As the President of Nigeria, if God wills, I will fight against corruption of this nation to a standstill” he stated.