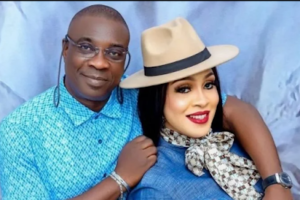 There have been unconfirmed reports on social media suggesting that Ropo slapped the music star.

In a statement issued on Thursday, Kunle Rasheed, an aide of the musician, shut down the allegations.

He described the rumours as “malicious” adding that at “no time” did the Fuji maestro have an altercation with his wife.

“We merely want to state that at no time did the Mayegun quarrel with his wife Ropo to the extent of her raising her hands on him. We are shocked that such allegation can be thrown so casually,” the statement reads.

“We also state that Mrs. Emmanuella Ropo Marshal is very busy with her wifely duties than to follow the Fuji lord to his official engagements.

“We make bold to say that this allegation is malicious and shudder even more that it could be peddled during Ramadan. Let the evil peddlers repent and seek the face of Allah for forgiveness.”

Kwam1 married the mother of four in Abeokuta, Ogun state, in November 2021.

Prior to their wedding, Ropo had taken to social media to shower encomiums on the singer.

“My heart bleeds love for you and it fuels my entire being. I had ideas about what you could be, but you shattered those notions and replaced them with a reality beyond my wildest dreams,” she had written.

“Men like you are not to be found anymore, You have managed to win both my heart and soul.”