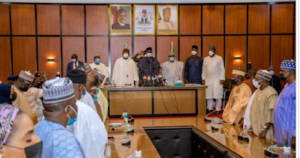 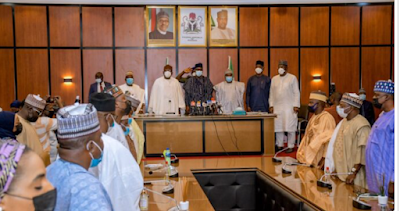 The state governments have asked the federal government to refrain from deducting from funds accruing to them and all local government councils as liquidation for the alleged $418 million London/Paris Club loan refund-related judgment debts.

The governors stated this in a letter dated April 4 as its response to a November 11, 2021 letter from the minister of finance, budget, and national planning, advertising the commencement of the deduction for the liquidation of the alleged judgment debts.

In March, attorneys-general of the 36 states appealed a judgment that dismissed a suit seeking to restrain the federal government from effecting the planned deduction of $418 million from states’ funds.

The plaintiffs in the suit marked: FHC/ABJ/CS/1313/202 sought to restrain the president and others.

Speaking through the body of attorneys-generals of the federation, the state governments said they were not parties to any suit on the London/Paris Club refund, hence, were not liable to any person or entity in any judgment debt being relied on by the federal government.

“Their Excellencies have drawn our attention to your letter referenced above, which the various states of the federation received at about the end of March 2022. The letter notifies the states of your intention to commence deduction from allocations due to the states from the Federation Account for the liquidation of the London/Paris Club Loan refund-related judgment debts on behalf of the 36 States of the federation and the 774 local government councils,” the letter reads in part.

“Please note that the states of the federation were not parties to any contract or suits concerning the London/Paris Club refund, from which the said judgment debts arose.

“Consequently, the 36 States of the federation are not liable to any person or entity in any judgment debt.”

It further noted that the deduction of the allocations due to the 36 states of the federation from the Federation Account to liquidate the London/Paris Club Loan refund-related judgment debts is the subject of an appeal filed by the 36 states at the Court of Appeal, Abuja.

They noted that they have also filed a motion on notice for an order of injunction pending the appeal.

The controversial payment of $418 million to consultants over the Paris Club refund had become a contentious issue between the three tiers of government.

Consultants had claimed the amount as a percentage of the payment of services rendered to the states and local government councils.

The federal government had said its decision to deduct the fund was based on a previous verdict of the court.