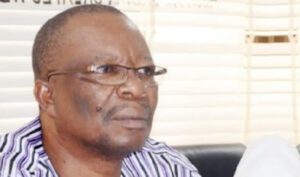 The Academic Staff Union of Universities, ASUU, has given a reason why it’s meeting with the Federal Government of Nigeria ended in a deadlock earlier this week.

ASUU said it rejected the Federal Government’s offer because it is “miserable”.

ASUU President, Prof. Emmanuel Osodeke, disclosed this in a statement on Thursday titled, ‘Why ASUU rejects government’s award of salary’.

Recall that ASUU had on Tuesday met with the FG through the Prof. Nimi Briggs committee.

The statement read, “The major reason given by the Federal Government for the miserly offer, paucity of revenue, is not tenable. This is because of several reasons chief of which is poor management of the economy. This has given rise to leakages in the revenue of governments at all levels.

“There is wasteful spending, misappropriation of funds, and outright stealing of our collective patrimony. ASUU believes that if the leakages in the management of the country’s resources are stopped, there will be more than enough to meet the nation’s revenue and expenditure targets without borrowing and plunging the country into a debt crisis as is the case now.”

Osodeke in the statement explained that the government imposed the ongoing strike action on ASUU, saying FG had encouraged it to linger because of its provocative indifference.

It read, “The Munzali Jibril-led renegotiation committee submitted the first Draft Agreement in May 2021 but the government’s official response did not come until about one year later! Again, Award presented by the Nimi Briggs-led Team came across in a manner of take-it-or-leave-it on a sheet of paper. No serious country in the world treats their scholars this way.”

It stressed that the government’s surreptitious move to set aside the principle of collective bargaining, which was globally in practice, had the potential of damaging lecturers’ psyche and destroying commitment to the university system.

According to ASUU, this is, no doubt, injurious to Nigeria’s aspiration to become an active player in the global knowledge industry.

“Rejecting a salary package arrived at through collective bargaining is a repudiation of government’s pronouncements on reversing “brain drain”. It is common knowledge that, more now than in the 1980s and 1990s, Nigerian scholars, especially in scarce areas like science and medicine, are migrating in droves to Europe, America and many parts of Africa such as South Africa, Rwanda, and Ghana with supportive environment to ply their trades as well as competitive reward systems for intellectual efforts. Does the Nigerian government care about what becomes of public universities in another five or ten years if this trend continues?”

Also, it stated that the New Draft Agreement had other major recommendations for the funding of major components of the renegotiated 2009 FGN/ ASUU Agreement, saying “one of such recommendations is the tax on cellphone and communication lines. Ironically, the Federal Ministry of Finance, Budget, and National Planning recently announced its readiness to implement ASUU’s recommendation, as a revenue source, but not for education, without acknowledging the Union!”

The statement stressed that at the commencement of the renegotiation of the 2009 FGN/ ASUU Agreement on 16th March 2017, both the Federal Government and ASUU teams agreed to be guided by the following principles as their terms of reference: “Reversal of the decay in the Nigerian University System, in order to reposition it for its responsibilities in national development; Reversal of the brain drain, not only by enhancing the remuneration of academic staff but also by disengaging them from the encumbrance of a unified civil service wage structure; Restoration of Nigerian Universities, through immediate, massive and sustained financial intervention; and Ensuring genuine university autonomy and academic freedom.”